Well its actually mainly about my comeback to the baking scene, after years (literally!) of failed trifles, bread-and-butter pudding and crumbles, I finally managed to bake something that people finished eating! hooray for me!

They say the proof of the pudding is in the eating...well, I'm just happy it looked like how a cake should look. 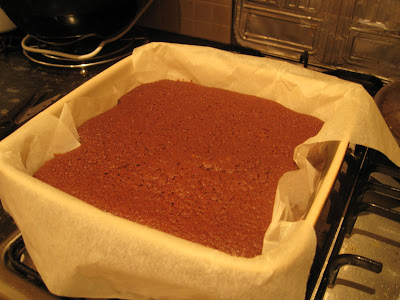 It was chocolate fudge cake (apparently), the original recipe is taken wholesale from my cousin's blog, somewhere I go to to dream about good eating now and again.

Also had a pretty good dinner at 60 Hope Street, somewhere I'd never be able to afford normally as mains go for about mid-20's, however as this week was the Liverpool Food Festival, they had a pretty good deal going on their website (its running till the 26th of Sept so any Liverpudlians want in, head to their site!) 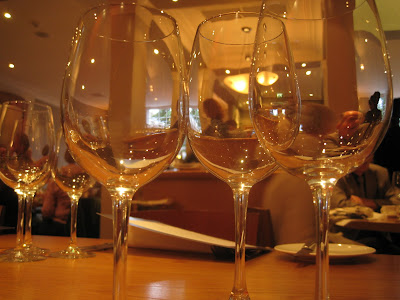 3 courses for GBP18.95 plus a bottle of Rose for 2, sounded like a pretty fair deal, so 5 of us went to try it out. Esther and her sister, Naomi are good foodie people, and Asyikin (an M202!) and Frank made up the party. 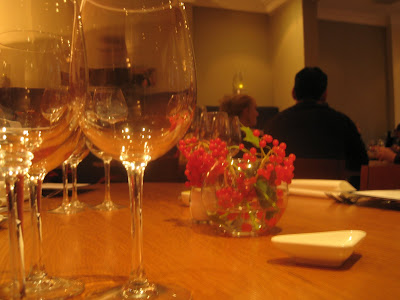 Spent a good while discussing what these berries were, and found that the staff didn't know either!
I think my order of starter (Cumbrian ham tart), mains (fillet of Goosnargh chicken) and sweet (Ms Kirkham's cheese with beetroot cake) was probably the weakest of the combinations available - Esther's hake main dish, with Asykin's smoked salmon starter and the mousse dessert were pretty strong options. Even so, the meal was probably one of the best I've had out in Liverpool in terms of English dining. Can't remember much about the wine except that it was Spanish, and there was a lot of it - slept well that night! 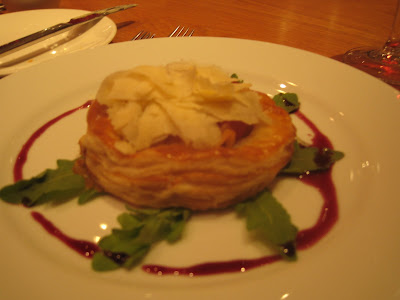 Then come Sunday, it was the end of the Food Festival, culminating in a Farmer's Market all along Hope Street. Something like a pasar malam back home, a farmer's market is how UK farmers have a chance to sell directly to the customer, thereby cutting out the middle man and resulting in a higher profit margin. 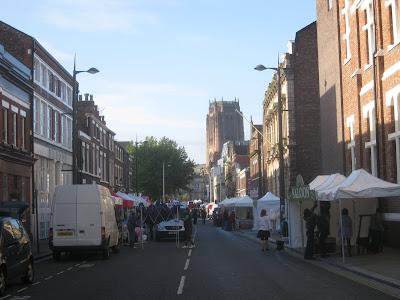 Looking pretty bare in the morning before it gets crowded later. 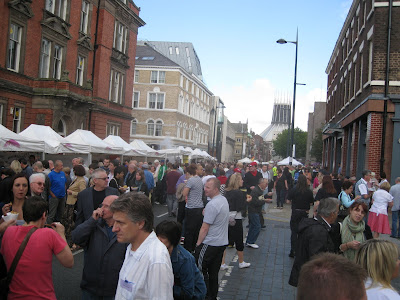 I'd planned to meet up with Esther and her cronies from church so heading there after Sunday Service, I found myself confronted with the above scene. Felt hungry so settled for a roll with Gloucester Old Spot hog roast with the stuffing and apple sauce at the shop below. 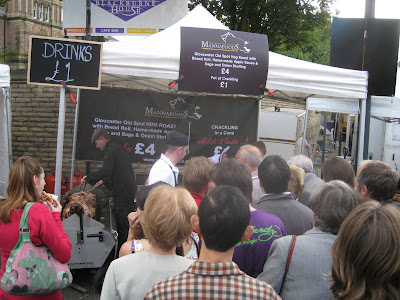 Let's just say I wasn't blown away. However things looked up as I'd heard there was going to be free performances by the Liverpool Philharmonic Orchestra with their resident conductor in charge. Ducking into the Philharmonic, I managed to steal a seat in a box after convincing an elderly couple, that no, I wasn't going to to shout or take tons of photos midway through the performance:-) 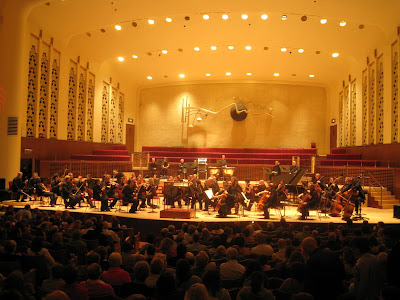 Beethoven's 5th Symphony (according to Pa), Haydn's Symphony No. 100 and Beethoven's The Creatures of Prometheus ballet was my introduction to live orchestral music, and it was good.

Tried biltong, which I'd read about in King Solomon's Mines and always wondered what it'd taste like. In real life, its a strip of jerky-like meat studded with seeds (fennel?) and is really really difficult to bite through. According to Esther (who should know since she spent part of her life in Africa), they're meant to be chewed and chewed and chewed. Not exactly sharing material:-) 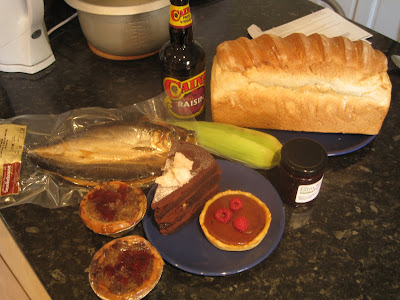 Total haul for the day: clockwise from top left-

Smoked kippers, which I'm assured will taste absolutely brilliant boiled in their bags and then dropped on top of white bread.

Cain's Raisin Beer, which as a flavoured beer, I don't get to try too often.

A French artisanal loaf, which apparently uses French flour (I obviously have no clue) and therefore is tastier.

Some sweetcorn lobbed into my bag by Esther.

A pot of homemade damson jam - was looking for quince jelly but no one stocked it.

A chocolate tarte and a slice of chocolate ganache cake.

Three weeks after the wind ceased to blow, the sea lion had a dream.

Now, as I told you before, there were other nights in which he had dreamed of the sea. But those were long ago and nearly forgotten. Even still, the ocean that filled his dreams this night was so beautiful and clear, so vast and deep, it was as if he were seeing it for the very first time.

The sunlight glittered on its surface, and as he dived, the waters all around him shone like an emerald. If he swam quite deep, it turned to jade, cool and dark and mysterious. But he was never frightened, not at all. For I must tell you that in all his dreams of the sea, he had never before found himself in the company of other sea lions. This night there were many, round about him, diving and turning, spinning and twirling. They were playing.

Oh, how he hated to wake from that wonderful dream. The tears running down his face were the first wet thing he had felt in three weeks. But he did not pause even to wipe them away, he did not pause, in fact, for anything at all. He set his face to the east, and he began to walk as best a sea lion can.

"Where are you going?" asked the tortoise.

It was in May that the winds began to blow.

The sea lion had grown used to wind, and at first he did not pay much heed at all. Years of desert life had taught him to turn his back in the direction from which the wind came and cover his eyes with his flippers, so that the dust would not get in. Eventually, the winds would always pass.

But not this time.

Day and night it came, howling across the barren lands. There was nothing to stop its fury, nothing to even slow it down. For forty days and forty nights the wind blew. And then, just as suddenly as it had begun, it stopped. The sea lion lifted himself to have a look around. He could hardly believe his eyes.

Every single leaf had been stripped from his tree. The branches that remained, with only a twig or two upon them, looked like an old scarecrow. And I do not need to tell you that there was no longer any shade in which to hide. But worse than this, much worse indeed, was what the sea lion saw next.

The water hole was completely dry.
Posted by Jonathan at 11:01 pm No comments: