A weekend in Hobart 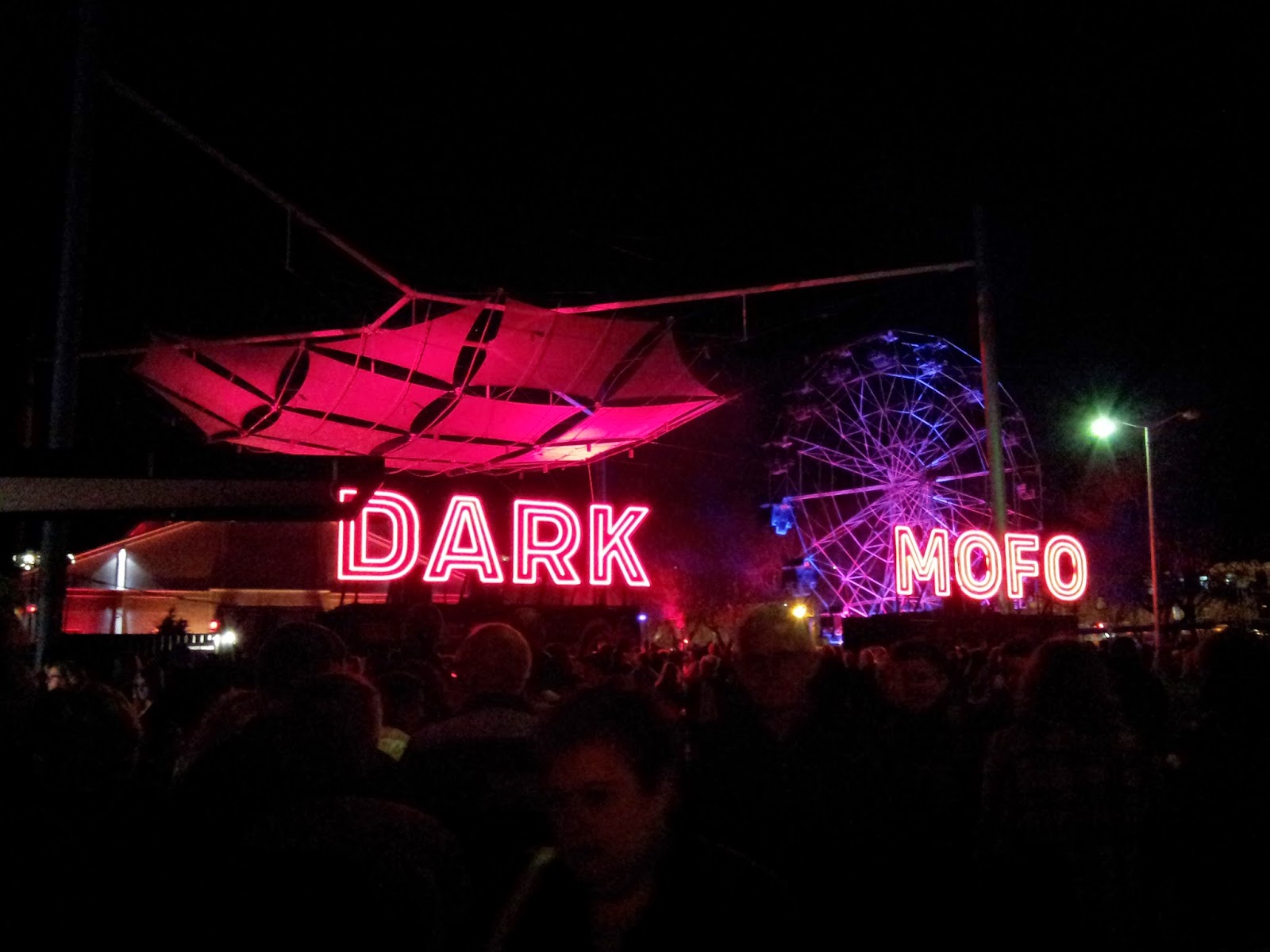 It's been a while since photos were part of the blog, so I thought it was time for a comeback. This week has been pretty busy at work, with several interesting patients taking up my attention (and my lunch breaks!) so on Friday when my resident suggested checking out the ongoing winter festival at the Docks...

Dark MOFO is by all accounts, a winter art festival, coordinated by the guys behind MONA (Museum of Old and New Art) in Hobart. Reading up on it now, some of the events sounded like they were pretty full-on; think jumping naked into Sandy Bay in this temperature!

What we were after was the food, specifically the Winter Feast! Crowds of people packed into the Princes Wharf at the docks; this was just opposite Salamanca. Above you can see the entrance. It was pretty chilly, and random jets of fire would spurt up above the lights every so often. Barrels of fire were set up all around, with people clustering up around each one, looking like extras from the set of Gotham city. 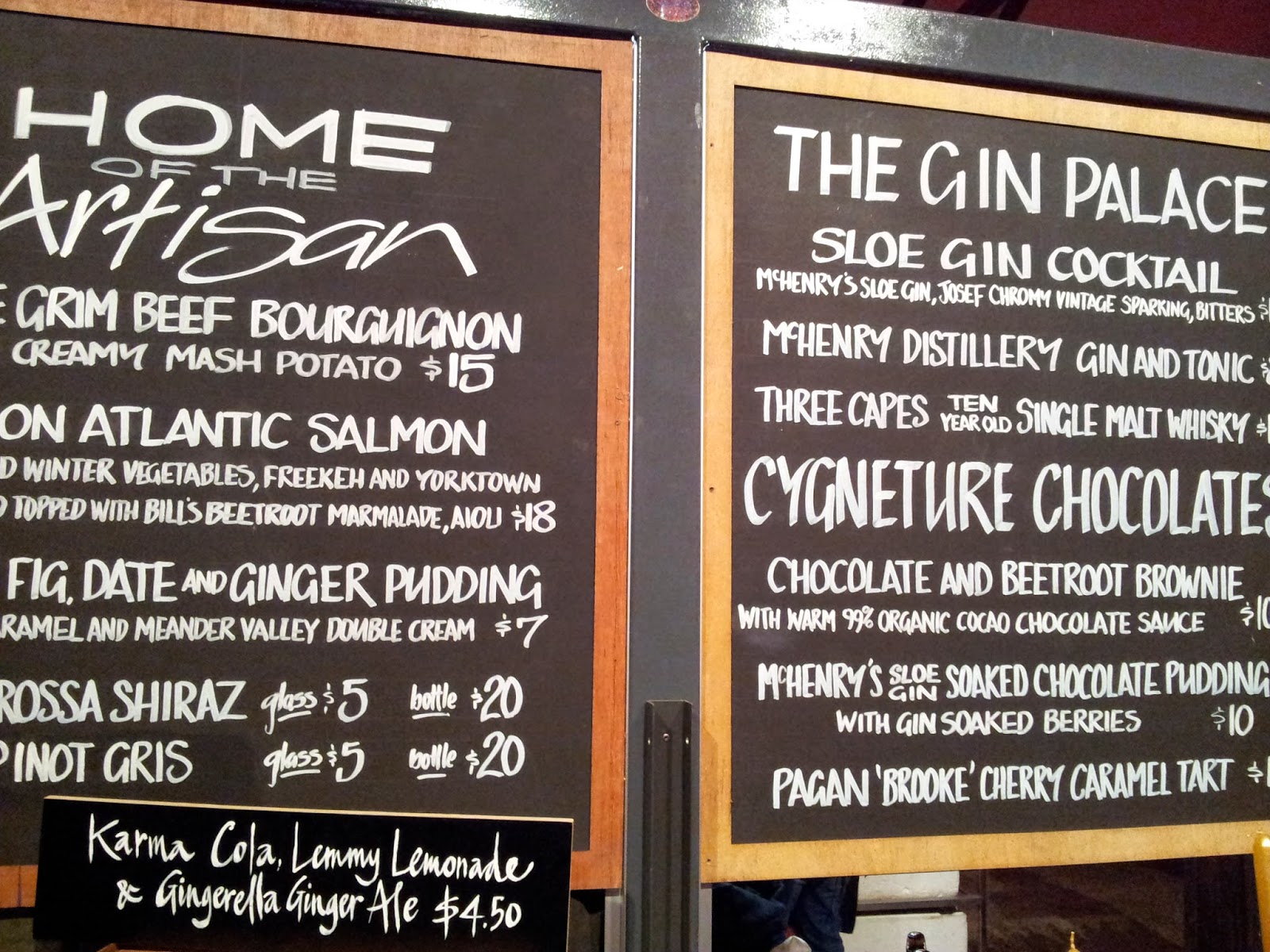 This was an example of what was on offer - pretty good food to be had! We scoffed down beef cheek(so tender!), mussels, goat and elderberry pie, Huon Atlantic salmon and pork/beef sliders, finishing off with a crumble, some cannoli with Lindt choc filling and the sticky fig, date and ginger pudding. 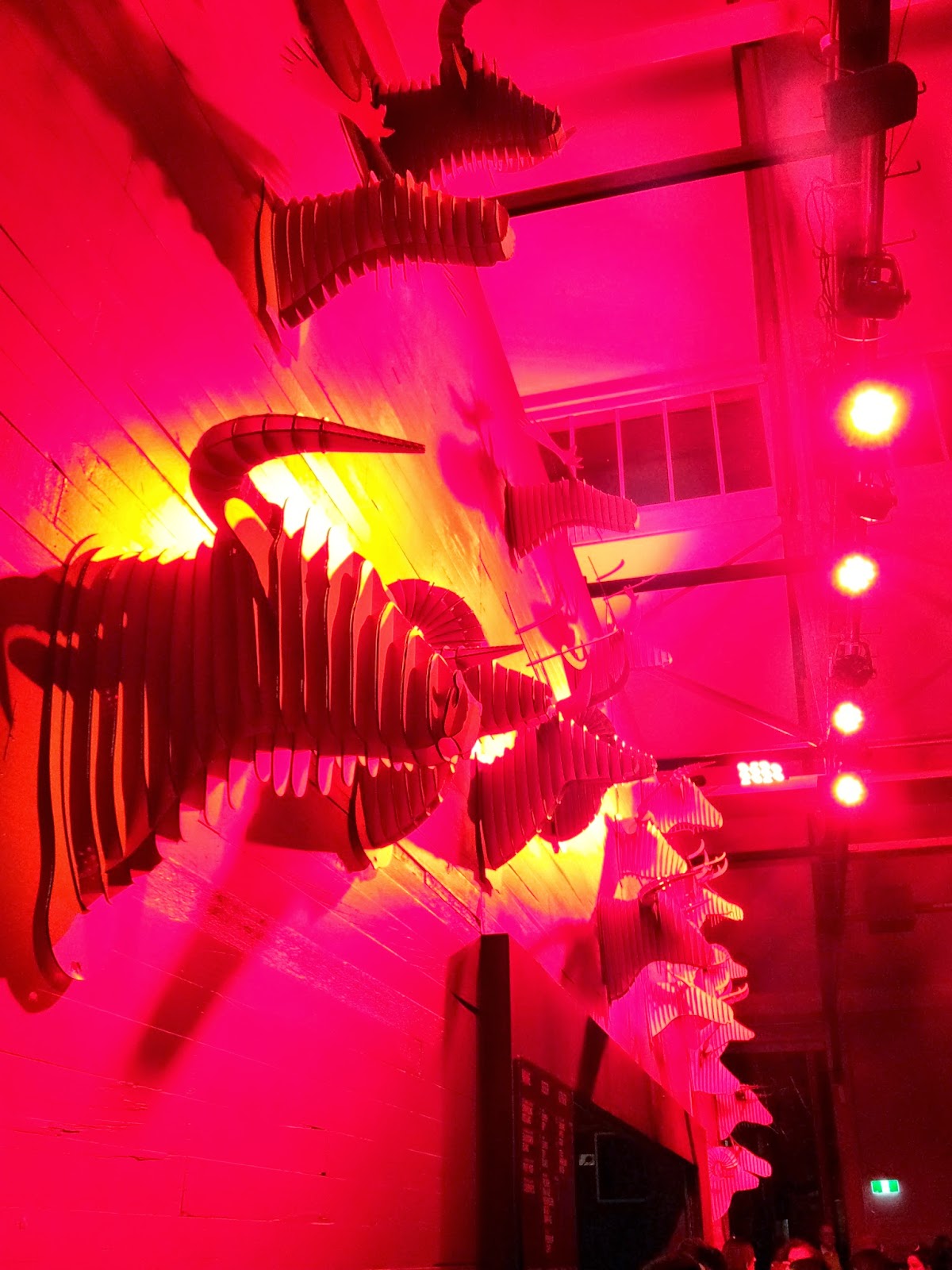 Artwork was also on offer...I'm sure these took some effort to put up! 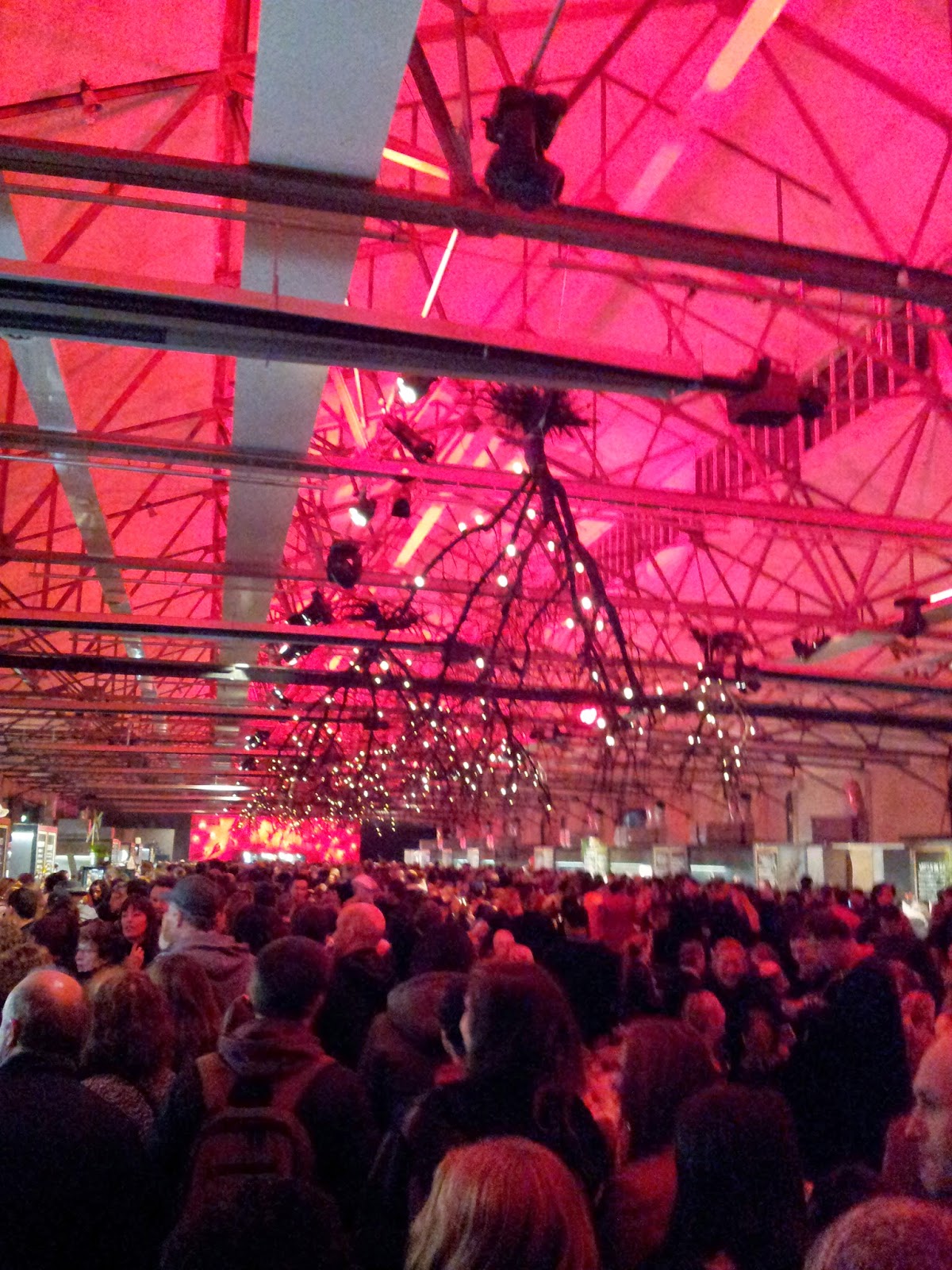 The next day, I thought I would be too full for brunch, but had been wanting to try Environs for some time. 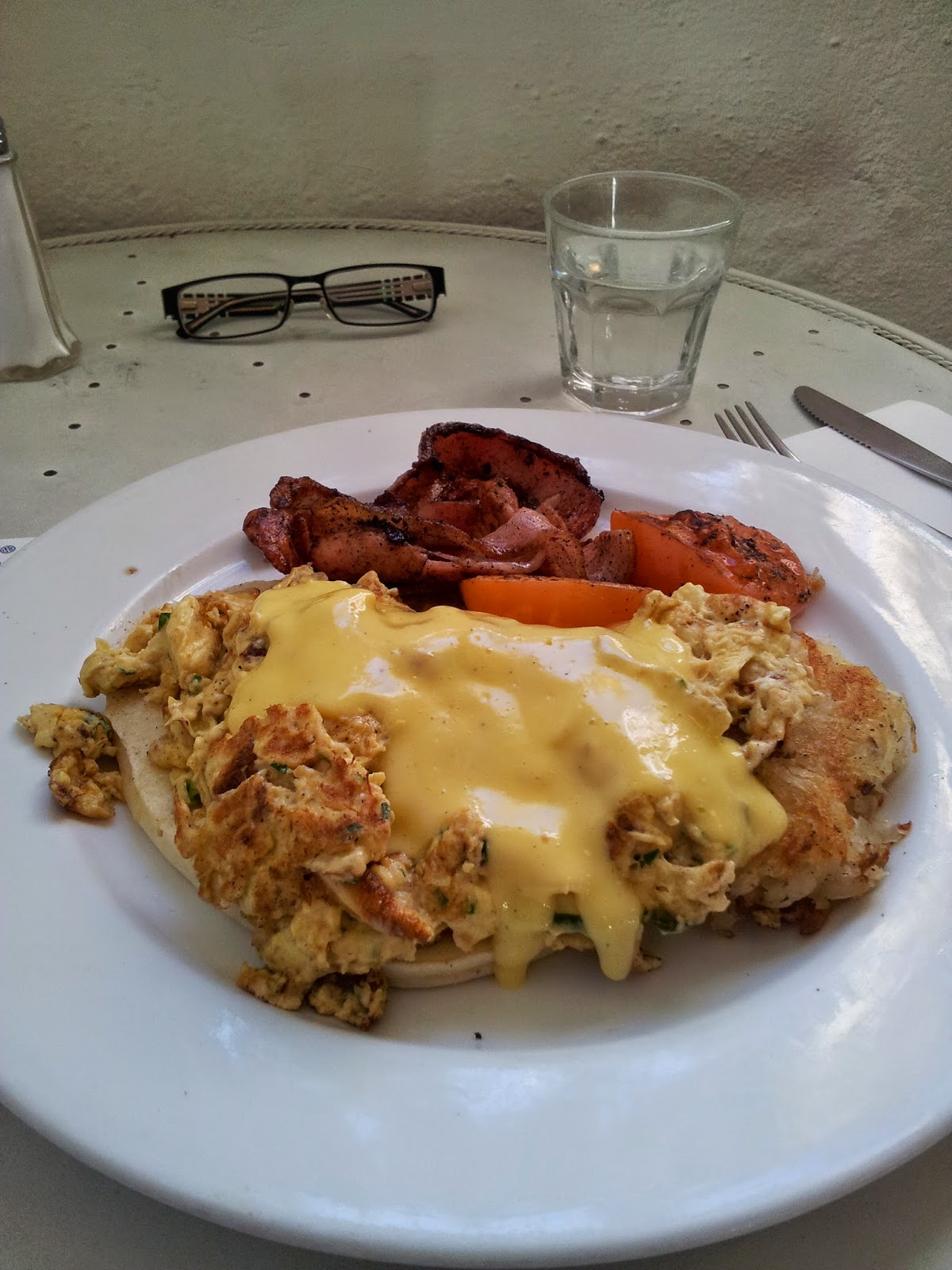 Their savoury brekkie with a corn cake and scrambled eggs sitting on top, with a side of bacon and tomatoes topped with hollandaise sauce was the main draw when I arrived at lunch.

Very filling, though the scramble was more an omelette (overdone) and halfway through, a small hair popped up in the meal!

They were nice about it and offered me a meal to replace it but I declined - they were nice enough to waive the cost, and hoped I'd be back soon! They were so pleasant about it I'd definitely give them another go.

All in all, a nice weekend full of food - I'm starting a pasta bake now with chicken, mushrooms, tomatoes and a 4-cheese melt; perfect for the weather!
Posted by Jonathan at 10:42 am No comments:

a DOOR of opportunity

I wanted to insert a picture of a door opening here, but decided cliches are best served sparingly.

It's getting pretty cold in Hobart now, and I'm counting my blessings (and my socks, thanks Val!) in between submitting abstracts, keeping up with the work rush and making sure I meet deadlines and get the most out of this year away from Melbourne as possible.

I always say I like the cold and that Hobart reminds me of the UK (though not as windy) but honestly, its a bit of a struggle to be my usual productive self when all I want to do is keep my hands and legs as close to my torso as possible and curl up to enjoy a good movie after each day at work.

So this Sunday morning, church was a nice surprise - always to be counted upon for a friendly greeting, catching up with the latest news of the week and worshipping in a corporate setting. A nice surprise today, too, as I came away with the message of this DOOR of opportunity.

You'll have heard of this before, these doors - often a gateway to a hidden promise, a portal to another dimension, and the finding and unlocking of these doors - such an adventure! Nevertheless, it was brought home to me today again, in the context of Ezra (which I'll be reading during the week!)

At the start of the book, King Cyrus of Persia (always thought that was one of the cooler names in the Bible for some reason) gets an epiphany from God. This non-Jewish king, responsible for one of the great empires in the 'olden' days, is moved to action by a foreign god, whom his exiled slaves worship. This move is compelling, so much so that he decides to release his slaves to go back to the land that his predecessors conquered - to allow them to return to their homeland and even to offer them assistance along the way!

Definitely not an everyday occurrence; and the distinctive point also being that not only was the door of opportunity thus presented (in a really odd fashion) to the Israelites, but that the Bible gives us exact numbers of those who did make the return trip. Stuart made the point this morning that the numbers of the returning Israelites, down to the last donkey were recorded, but were only a fraction of the entire Israelite population who were in exile.

He suggests that maybe this is because those that were left behind did so because they were comfortable with their circumstances, that uprooting and travelling to unknown territory (70 years they were in exile - time enough for a new generation who had never known their homeland to arise) presented more uncomfortableness that they could handle. And that only a fraction recognised the door of opportunity and took it.

As for myself, doors of opportunity are being flung wide open, it seems. Opportunities to expand my professional know-how and my future as a nephrologist, opportunities to settle down, to grow in faith with a new group of people in Hobart, to grow closer to Penny and to mature in my walk with God - these are not wanting in numbers.

It is cold and as much as I would like to curl up and be cosy by the electric heater, now is the time for stepping through some doors!
Posted by Jonathan at 5:56 am No comments: 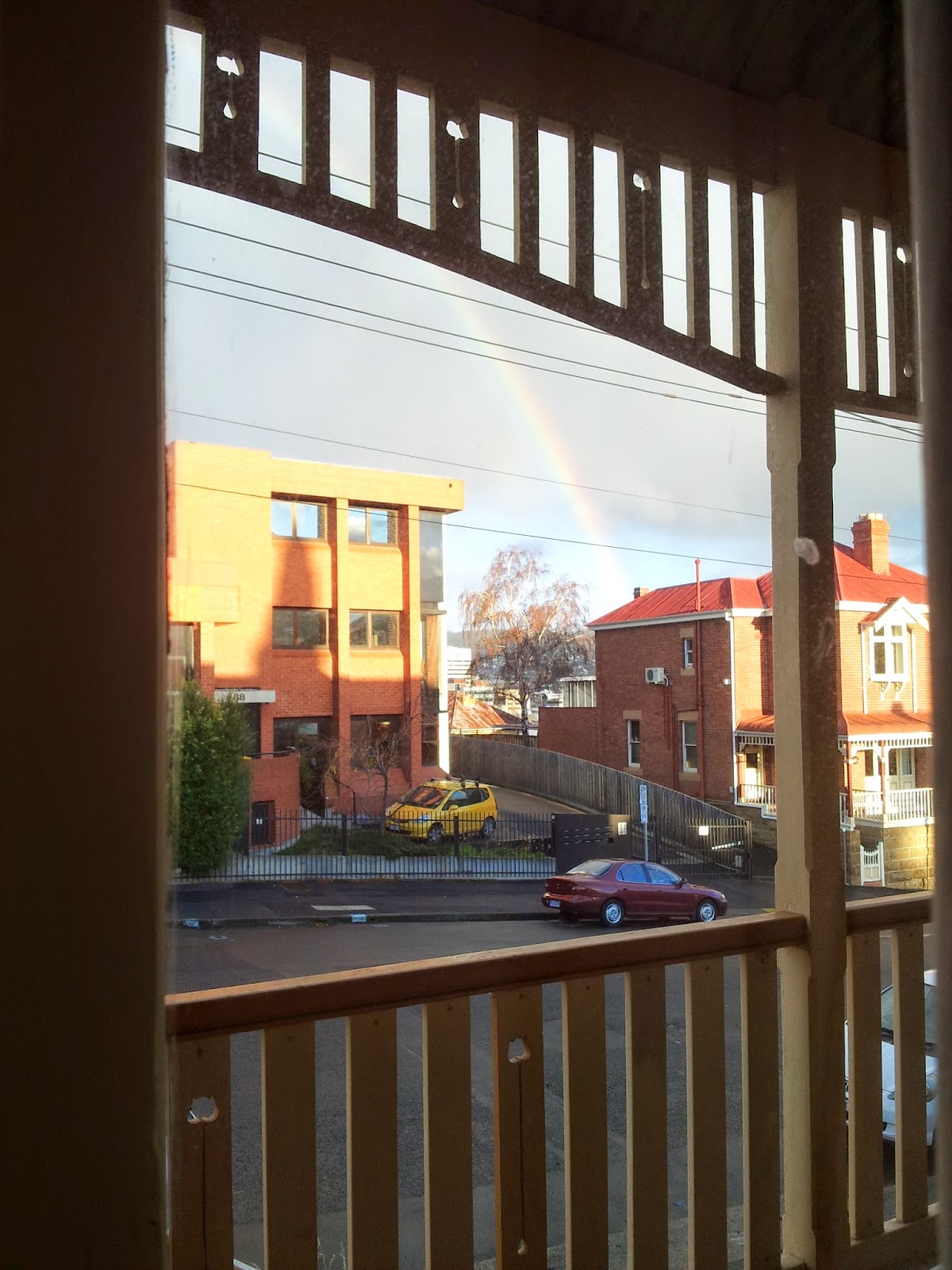 Always a rainbow after the storm.

Posted by Jonathan at 9:34 am No comments: