The Wait is over

Few things at this time in life can compare with the tense feeling in the pit of my stomach when I saw the words 'Resit' on my exam transcript. Well, not totally unexpected, but still, having to fly back early is no fun to ay the least.

Fewer things can compare with the feeling of relief when I saw the email from faculty which told all medical students to ignore the 'Resit' notices because there was a failure in the system reulting in all students getting the message. As long as we'd passed all the individual exam components (which, praise God, I did), we were considered to have passed.

After congrats from the Liverpool bunch (who all passed, btw - yay!), congrats from parents, and while waiting for this page to load on my dailup account, I am overwhelmed with thankfulness to God. A second chance of sorts. An act of mercy. Without going into all the musings about what would''ve happened had I failed, I'm truly grateful to Him for this journey He's bringing me on and all its realisations in between.

Now I can go into OT tmrw relieved.
Posted by Jonathan at 4:54 pm 2 comments: 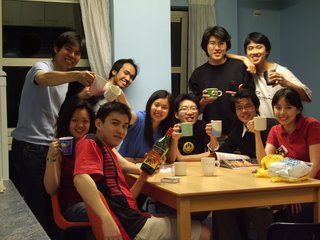 In a well populated kitchen
Our last night in Liverpool, our last day really, was a blur of packing, struggling with huge boxes up and down 2 floors and a mad dash 2 hours north to move our stuff to Barrow. That was just half; tmrw we're moving Alex, Tricia and Jack to Southport. If we're knackered tonight, tmrw will be no better.

For our troubles, we managed to get hold of a van which Hsupheen drove around. Acording to her, refined girls do not drive vans. This I leave to your discretion. Against all odds, we managed to get back in time for dinner and to hear England beat TnT 2-0. Woohoo.

Our last lunch in Liverpool? By some common consent, though we were miles apart, all of us for some reason ate fish and chips for lunch. Except Edward, who had a chicken burger and chips, so its probably not significant. Dinner was of course the necessary finishing up of all the frozen food that we'd not managed to cook so far. Sausages, chicken and chips/hash browns galore. Aiky, you'd have probably died.

And now, the sound of vaccuum cleaning fills the house as one by one, rooms are being dusted up, vaccuumed and polished, just so that none of us incur the wrath of the management after leaving, forcing to pay an exorbitant amount of money for 'notvacuuming under the bed'. 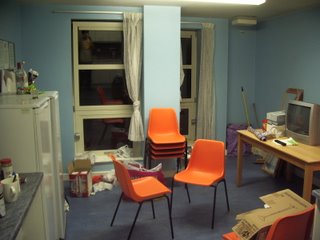 Our kitchen on the last night

As I write this, Hillsongs' Through It All is playing on my laptop, the only thing left on my tabletop. Pretty apt, as He definitely has been faithful, to His word to keep me/us safe from harm this year. I can think of at least 2 occasions where serious consequences might have ensued if things had gone otherwise, but didn't. He's been faithful to bring us through every obstacle, from fitting in with an alien culture to doing relatively well in studies, to bringing people like Christine Tierney to help us out. Forthcoming exam results notwithstanding, I just have to mention that He's definitely played a big part in providing for us as well, from a church to settle in, to friends who've been a great help and jobs for those who needed them too. 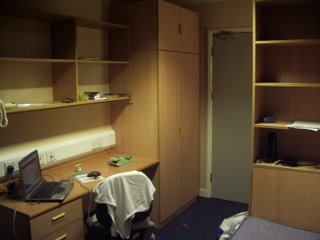 My last night sleeping on an empty bed with no sheet or duvet.
Next post in Malaysia. Whoopdedoo!

A year has passed Set 1 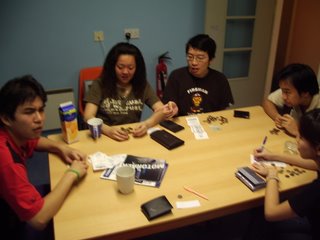 Settling bills night - where we try to push all the coins to one unfortunate person, then having to get coins from them for laundry 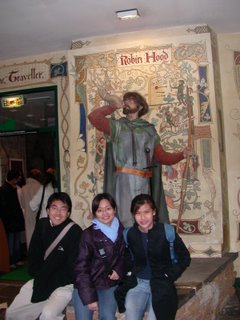 A chance meeting in Nottingham 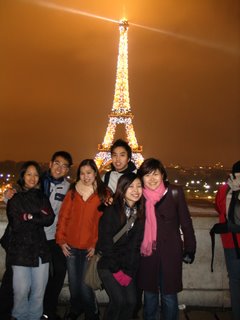 In Paris for Christmas 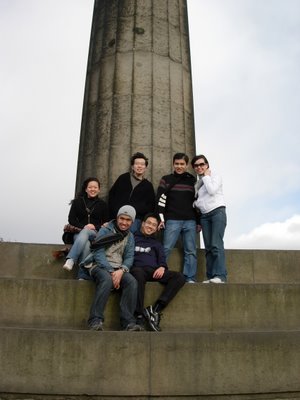 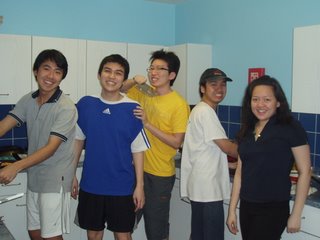 Kitchen - where we spend our evenings 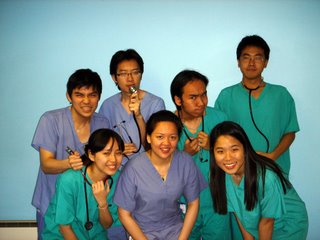 Future docs - your lives are in our hands..bwahahaha 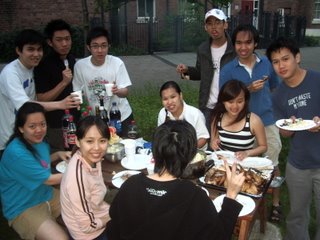 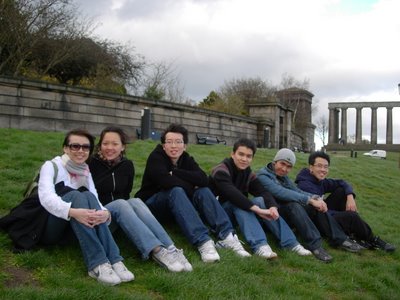 Its all over but the shouting. I finally finished my OSCEs today and have just finished the 1st round of packing b4 going home. The next few days are going to be really hectic, needing some planning; change of addresses with the bank, getting our elective confirmation slips, passing around all the stuff we couldn't finish throughout the year, moving to Barrow and packing to go home...well, at least exams are over and I'll be back in msia this time next week.

God did a good job in guiding me though the stations today I think. I messed up a few at the start because I was just too nervous, but He managed to pull me together to get my other stations more or less up to par. Don't think I could've done it on my own.
Posted by Jonathan at 12:22 am 1 comment:

Is going to be a long and anxious one. Part of the disadvantage of going overseas is you're never sure when you have to take an early flight back home for resits. Yup, exams are over, and I'm left with a slight(ok mayb a bit more) feeling of worry. Not for lack of trying, but maybe trying in the wrong direction. Like when I see how others know so much more that I maybe should have known, that I found questions hard when others tackled them routinely. Which culminates in the general feeling of not being on par with what's expected of me by the end of 3rd year. And which brings me back to the very real fact that I may be faced with an early flight back during summer. I hope not though.

Not that I found the papers extremely extremely hard, either. Just that there weren;t a lot of those moments when you know for sure that this IS the answer and had to guess based on what you knew. And as I told my housemates, when that happens, 50% of the time I'm wrong.

If there was ever a time to change from the pseudo self studying method that I've been in and out of since secondary school(its true), it's now. And if I make it 4th year, I hope that it's not going to be about passing exams, but of shouldering the responsibility of keeping other's lives safe.

Which really goes to show where I am on the way to becoming a doctor, I'm supposed to be halfway through, but am now having to play catch-up growth, like a poor IUGR baby.

Its all about You, Jesus,
And all this is for You
For Your glory and Your fame,
It's not about me,
As if You should do things my way,
You alone are God, and I will surrender
To Your ways.

Considering the way things went, I'm ashamed to even claim this song. But seeing as it really helped me through the uncertainty and worry, I'm going to keep right on singing it. And to all those who kept us in prayer, from all over the world, thank you. Really.

Posted by Jonathan at 1:22 pm No comments:

Deja-vu (which btw, is caused by a temporal lobe seizure)

Exams are tmrw. And as usual, perhaps even more so, I don't think I'm ready. To put it mildly, I was really freaked out when doing the past years.

Praying helps some, but I have to admit there is a lingering bit of doubt about whether I'll make it. And this after going thru sem 3 and 5 in IMU! Really, you'd think God bringing us through those would have given me enuf faith to believe this time will be no different. And when I think about it, its pretty pathetic from the perspective of those suffering due to the earthquake in Indon. Those guys are in bad shape and need far more. OK before i continue babbling on...

The plan is to finish up, then go thru the 20 pages of ethics one more time b4 sleeping tonight. Hopefully dinner QnA wont scare me too much, as it usually does. Normally its good, but not the night before the exams!

Btw, props and thanks to ben, mel and ant who are cooking soup from tudor close for us. Hopefully one shot is all we'll need and we can all go home safely on the 18th as planned.
Posted by Jonathan at 3:53 pm No comments: