Jack's nick on MSN was exactly what it said, except for the bitchy part.. I don't know what mademe suggest it, mayb due to some sad attempt to let off exam steam, but there it was:

Playstation tournament in I3!
Contestants: Alex, Ed, Jack and I

Games: Capcom VS Marvel, Granturismo 2, and some footie game I haven't the foggiest about..

At stake: Last out of the four gets the envied cooking position on Sunday! Third runner up washes..

Well, having not played PS before, but having watched Street Fighters being played ages and ages ago, I took on Ed with the WAR MACHINE(some Marvel character).

Unfortunately, Ed seems to play this thing in his sleep, and wiped the floor with my (sorry, WAR MACHINE'S) ass. Not a good start. Next I face Alex, and decide to keep the same character, after all, if he was a Marvel character, he cant be THAT bad... And for a while, it looked as though I was going somewhere other than fourth place. WAR MACHINE apparently can do this super power where he shoots missiles up in the air which rains down on the opponent. And he has this other super power where he hoists a HUGE gun/laser thingy on his shoulder and proceeds to blast the daylights out of...anyway.. As I was saying, though things looked pretty for a while, destiny overtook me, and I was left on the floor with Alex grabbing the 3rd place. So, at the end of the first round, the points were:

Ed/Jack in front, Alex with 2 points and ol' me with 1 point.

Next up, GT2...Some racing game. Wouldnt you know it, in my hastiness to drift and slide and brake etc etc, I end up turning around and going in the opposite direction more than once. Basically I''m hopeless. I feel like I have 'ten thumbs' like I read in the medical magazine, which, incidentally tells me I'm not surgeon material. Ed and Alex race past me in record times, leaving me choking in the fumes of their cars running in the opposite direction.

Ed got 4 points here, Jack/Alex somewhere behind, and me with 1 point

Footie to finish off, with me in last place, the fight is on to see who washes up. I play Alex first, self proclaimed master of the pitch. And really, he moves me around really well, though I'm proud of my goalie...he saved every ball...except for one. ANd I'm into my final game. This time though, I'm up against Jack, so it's relatively easier since both of us are learning this together. The ball lies at his goalie's feet, and my player runs towards it. Jack waits, anticipating the foul, and the red card that is to come. Except that it doesnt. My player deftly dribbles away with the ball, passes, and shoots into an empty goalmouth. "But I thot TACKLE KEEPER MEANS FOUL ONE??" Jack shouts, while Alex and I double over with laughter. The turning point. My team(Arsenal, I'm ashamed to say) play with renewed vigour, another goal being scored in the second half after a running pass was hit past the keeper. And now, its all up to Ed. He beats Alex to win the overall prize. Rest on Sunday evening while I toil in the kitchen.

There's talk of making this a weekly event. Goodbye to peaceful Sundays then.

Not to mention, nasi lemak on Sat nite just before the tournament was pretty cool. We had it with rendang and sambal and 2 types of egg. 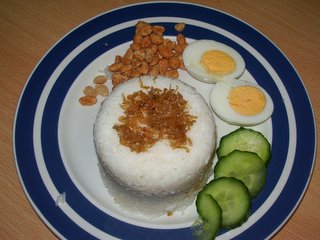 Oh, one final note: my previous post...is an illustration of how my relationship with God has been recently. Nothing more.
Posted by Jonathan at 10:30 pm